Avanti Architects were engaged in 2015 as Conservation Architect, Project Manager, Principal Designer to oversee the phased repair and restoration of the iconic façade of the Grade I listed, Natural History Museum. Designed by Alfred Waterhouse in 1873- 81. Working in collaboration with Catherine Woolfit and Taylor Pearce we have just completed Phase III of specialist repair works to the terracotta façade. Avanti Director and Conservation Lead  Fiona Lamb describes below the background and conservation and repair strategies involved in the project.

The Waterhouse Building is the result of a long campaign led by Richard Owen in 1859, the then superintendent of natural history collections. He persuaded the trustees of the British Museum that a new building was needed to accommodate their ever-growing catalogue of the natural world.

Owen envisioned a ‘cathedral to nature’ to celebrate the richness and abundance of life on Earth and inspire scientists and the general public alike.

Following four years of campaigning, in 1863 he won approval to make this vision a reality.

A competition was held to attract the best designs for this new public building and in 1864 the coveted contract was awarded to Francis Fowke, who had also designed the Royal Albert Hall and parts of the Victoria and Albert Museum.

However, when Fowke died the following year, the relatively little-known architect Alfred Waterhouse was appointed to bring Owen’s vision to life.

19th century London has heavily polluted and architectural details were at risk of quickly disappearing under layers of black soot. Stone carving was also expensive, slow and labour intensive.

Waterhouse and his contemporaries working on ‘Albertopolis’, the then relatively new cultural precinct at South Kensington, believed terracotta to be a more hygienic option that would offer some resistance to the grime of Victorian London. It also provided a comparatively quick and inexpensive way to manufacture decorations.

Architectural Terracotta is a fired clay product from a prepared blend of clay. The clay body is slip cast or hand pressed into moulds forming hollow blocks ranging from simple ashlar to highly decorative units as seen at the Natural History Museum.

Over the past 5 years, our team have carried out a combination of photogrammetry and laser scanning and captured the façade detail so that defects could be located and quantiﬁed. Non-destructive investigation using a combination of techniques (impulse radar, thermography, and metal detection) revealed structural details which were signiﬁcant for understanding the condition of the terracotta facings and causes of deterioration. Whilst investigation found that ferrous metal ﬁxings are absent, it highlighted the varying extent of mortar and brick inﬁll to facing blocks and the role this plays in fractures through load-bearing blocks. This phase of works has included detailed mortar repairs to several cracked capitals and column base stoolings adopting repair techniques that have been trialed by Taylor Pearce.

Certain defects in the case of the vertical splitting of the columns have been found to be a direct result of the columns being hollow. The cause of the cracking is compressive stress due to thermal expansion in the columns which are constrained in their openings. A series of trials were carried out to determine how best to ﬁll the column sections and with what mortar/grout mix.

After testing various techniques on terracotta pipes which could be sliced open to determine how well the columns could be ﬁlled a technique was agreed.

This method has now been carried out on a number of the defective split columns and is being actively monitored over each phase. This technique of ﬁlling the column relieves stress and prevent further deterioration by increasing their thermal mass & increases their vertical capacity, so that they can withstand the temperature ﬂuctuations better.

Planning is underway for 2021 phase of works which requires a bridged scaffold above the main entrance so that the museum can remain open during the works. 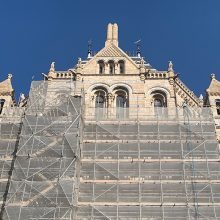 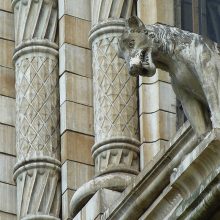