Walter Gropius (1883-1969), Marcel Breuer (1902-1981) and László Moholy-Nagy (1895-1946) – all designers and teachers at the Bauhaus, the vastly influential German art school – have been commemorated with an English Heritage blue plaque. The plaque was unveiled on the Grade 1 listed Isogon Building, refurbished by Avanti Architects, in Belsize Park, where the trio lived and worked in the 1930s.

At the unveiling, Kate Mavor, Chief Executive of English Heritage, said: “To be able to recognise three prominent individuals of the Bauhaus – Walter Gropius, Marcel Breuer and László Moholy-Nagy – together on the same building where they lived and worked is an excellent opportunity to honour their significant contribution to the fields of art, architecture and design. It is highly appropriate that their joint blue plaque will appear on the Isokon Building, itself an example of radical modern design.”

“This plaque marks a significant milestone not only in celebrating these three giants of modernism, but also by giving further recognition to the Isokon Building that was briefly their home and refuge. Since the Isokon Gallery opened in 2014, we have welcomed over 15,000 visitors from around the world who want to learn more about the remarkable story of Isokon, in which these three Bauhauslers play such an important part, and this blue plaque underlines the enduring resonance of this story.”

Other speakers at the event included Kate Davies, Chief Executive of Notting Hill Genesis; Gerry Harrison a former Camden Borough Councillor and campaigner for the Isokon; Charlotte Schwarzer, Head of Culture and Education at the Embassy of the Federal Republic of Germany; Kristóf Szalay-Bobrovniczky, Ambassador of Hungary; John Pritchard, grandson of Jack Pritchard the original client, on behalf of the Moholy-Nagy family; and Wolf Burchard on behalf of the Gropius family.

For more information on the award-winning restoration project and the Avanti-designed Isokon Gallery located within the former garages visit our Isokon and Isokon Gallery project pages. 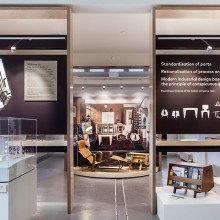 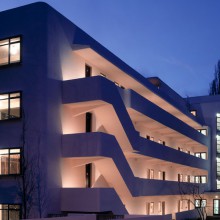 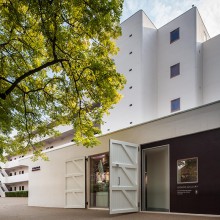